I love to read. End of story. Pun intended. 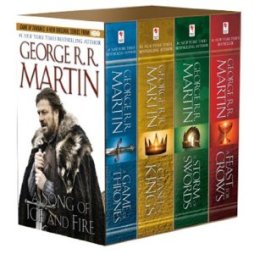 1. A Song of Fire and Ice series, better known as Game of Thrones – actually books 1-4 – A Game of Thrones, A Clash of Kings, A Storm of Swords, and A Feast for Crows by George R.R. Martin

Winter is coming. God bless the readers that started reading this series in 1996. Yes, 1996. I was wearing stretchy pants when this mystical world created by George R.R. Martin came to be. It is part LOTR, part Wizard of Oz, part UnderWorld. This is not light-hearted reading. With an endless rotation of characters, thickening tangled plotlines, and, frankly, more violence than I’m used to, this is tedious reading. Yet, 3188 pages later, I’m still longing to get my hands on book 5.

Okay, so I’m a year or two late to the party on this undeniable book. This is a story about the spirit of courage. This is the story of Louis Zamperini, an Olympic runner who survived. Zamperini was in the Army Air Corps, was in a plane crash, survived by floating on a raft surrounded by sharks in the middle of the ocean for 47 days, only to become a POW in Japan. He survived, barely, and came back to the U.S. with depression and a liking for alcohol. Zamperini’s life began again when he became a Christian after attending a Billy Graham revival in 1949. You might need a strong stomach for this book, it gets a bit graphic. But it’s gripping and rewarding.

3. Hotel on the Corner of Bitter and Sweet by Jamie Ford

This is a love story of a young Chinese boy and a young Japanese girl in Washington during World War II. This is also modern-day story about an estranged father (the young Chinese boy 40 years later) and his son. This book is pretty and sad. Drink this book with a nice cup of tea.

Although her other books are wildly more popular, this was Jane Austen’s first published book. It may also be my favorite. It’s a bit more tongue-in-cheek than her usual love stories, and Mr. Tilney is the man of the hour. I’ve read it, watched the movie (Masterpiece Theater) and loved it! Catherine Morland is a bit awkward and gullible, and, to me, much more understandable than the strong-willed Lizzy or silent Eleanor. I feel like I know this girlish young character (maybe because she’s as big a bookworm as I am?).

What can I say? It was the year of England. When we traveled there this spring, it was only a month before the Queen’s Diamond Jubilee. Therefore, the bookshops all had spreads of Queenie books out on display. In case you didn’t know, it rains a lot in England. So into lots of bookshops we went.

After perusing enough Queen Elizabeth books to pass a few rainstorms, I was hooked. I ended up reading this one when we got home. It was insightful, and makes me like the old broad. Even if she refuses to smile. At least I feel like I understand her now.

Goodness me, I grew up watching this happy-go-lucky, whipped-cream-with-a-cherry Hayley Mills cinema feature. Happily, the book was just as delightful. If you don’t want to smile and play the Glad Game all over again, don’t read this book.

I KNOW. So lame is this that this book is even on my list. I don’t even believe in diets! Seriously, I love cheese. I love chocolate. Just hear me out!

When I saw this book in the library I didn’t pay any attention to it, just like any/all diet books I come across. But then I kept seeing it wherever I went. Over and over again. Finally I read the subtitle “specialized for women 5’4″ and under” and thought hey! that’s me! I’m short! Really, I’m 5’2″. Since the book was inescapable, I started skimming, and it was actually interesting. Jim Karas specializes in working with celebrities under the height of 5’4″ because, he says, there is a whole different foundational approach necessary to living with a petite frame. I know, it still sounds kind of lame, but it was really interesting if you’re a shorty life me. Just trust me!

I was an art major. I live near several of the locations of the greatest art heists of all time. To me, stealing art is the most intriguing of crimes. It hardly ever pays off and requires so much forethought. Most interestingly to me, some paintings have never been found. I wonder whose walls they are hanging on. This is a collection of short stories about the world’s greatest art heists.

This piece of historical fiction follows the lives of five women whose lives coming together while they live in a small town in England during World War II. (Goodness, I didn’t realize I was stuck on a WWII theme here in my reading this year.) Friendship. Love. Intrigue. Children. War. Read this with a blanket and a cuppa.

Note: this book is available in the Kindle Lender’s Library for free if you are a Prime Member!

10. In Defense of Food by Michael Pollen

Oh man, I know it. There are two food books in my top 10. But Michael Pollen, author of the famous Omnivore’s Dilemna, will make you forget you are reading something helpful and educational. This “eater’s manifesto” is about getting back to the basic’s of food. A food philosophy if you will. I’ll tell you what, you can get the basics of this book in just a few words: Eat Food. Not too much. Mostly plants. There you go.