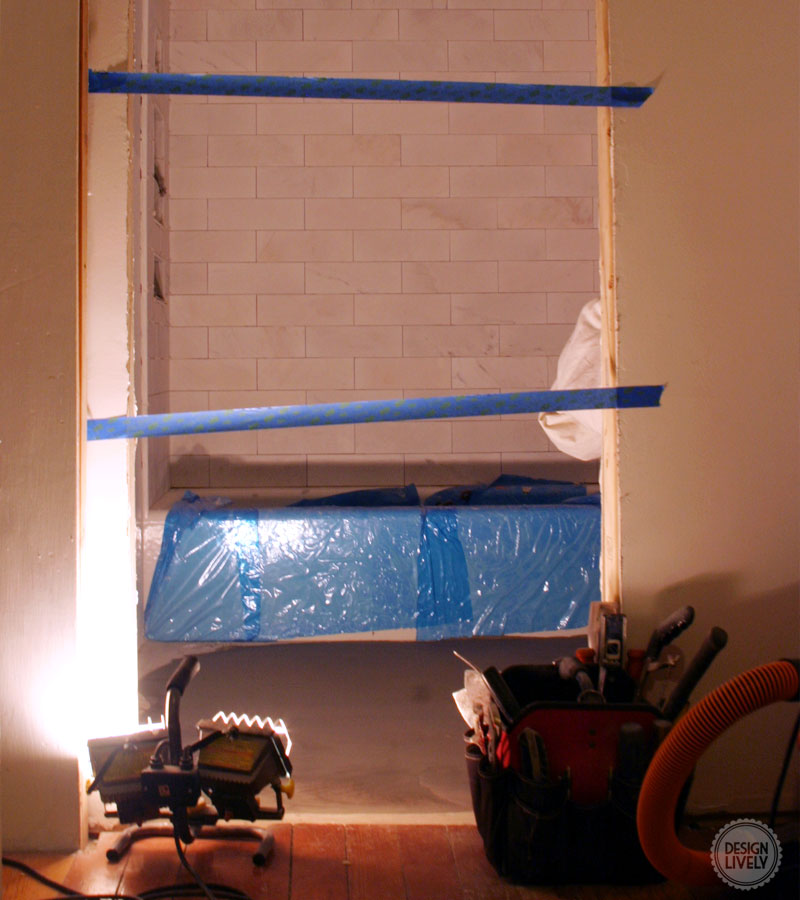 I last left off talking about gutting our bathroom, having new walls built, with rough plumbing and rough electrical, new door frames and window boxes, and the promise of progress. I am happy to say that, eight weeks after the initial gutting, we have a shower again!!!!! Not one of those exclamation points is excessive. Two months with no shower is too long! 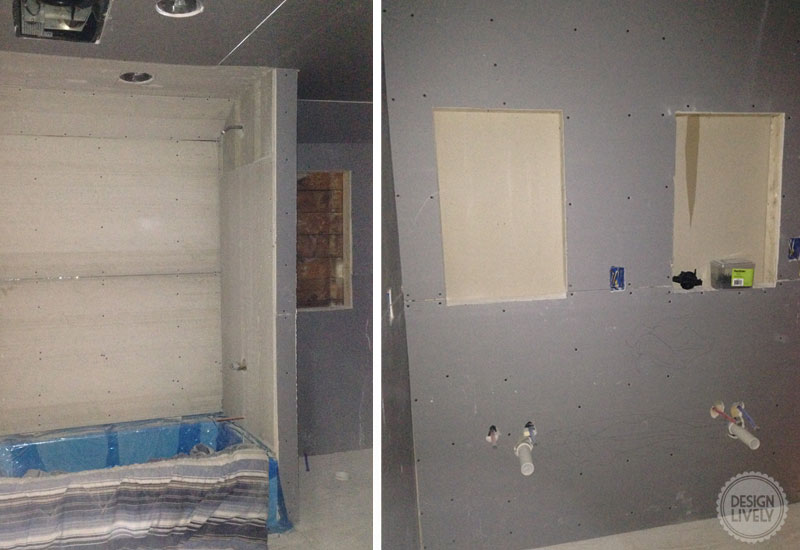 Next came blue boards. Once the blue boards went in, it was mighty dark in that bathroom. I’m so glad we decided to put a new window in. Blueboards are the base material that plaster is applied on.

Our home is older and has plaster walls, which we’ve decided to continue with in our newly renovated rooms. I’ve said it before and I’ll say it again, plastering is an artform and I’m so impressed with plasterers. Plaster is more expensive than drywall, but the continuity of the finish throughout the house is important. 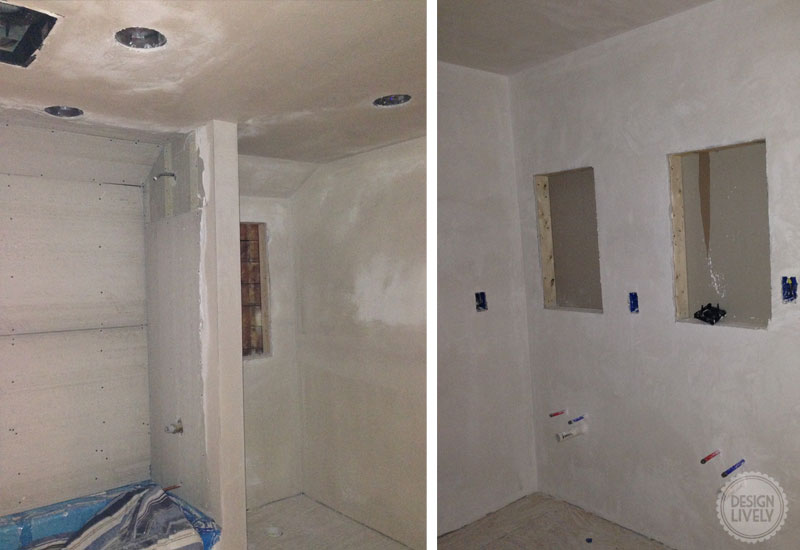 After the plaster went in, it was time to level the plywood floors with self-leveling concrete. After this dried we were able to move in the vanity! Woo hoo! (More on the vanity later.) 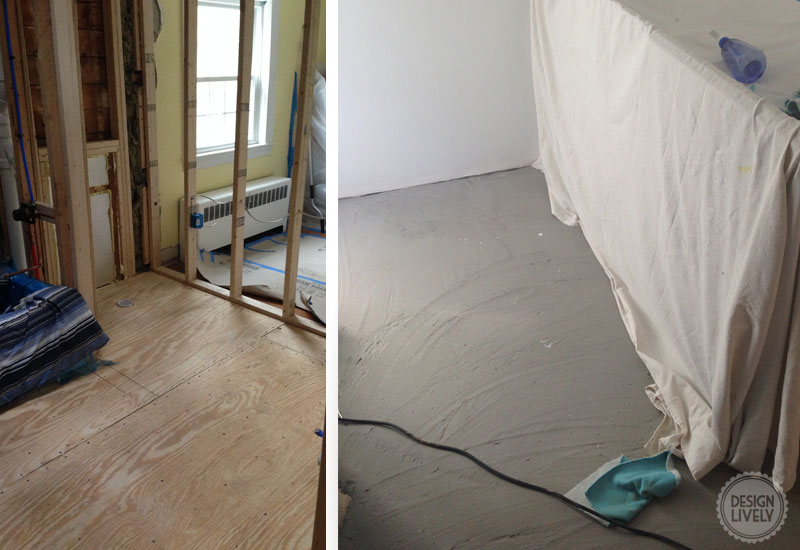 After the plaster had cured for a few days, it was time for painting prep. While plaster is pretty smooth straight from the get-go, you’ll want to go over it with a fine sandpaper to smooth out any imperfections. Once you’ve finished sanding you’ll want to wipe down all the walls with a damp rag. Next up is priming and painting. I applied two solid coats of Zinsser 123 Primer – it smells horrible, but we needed the good stuff to protect the bathroom walls from all the shower moisture. 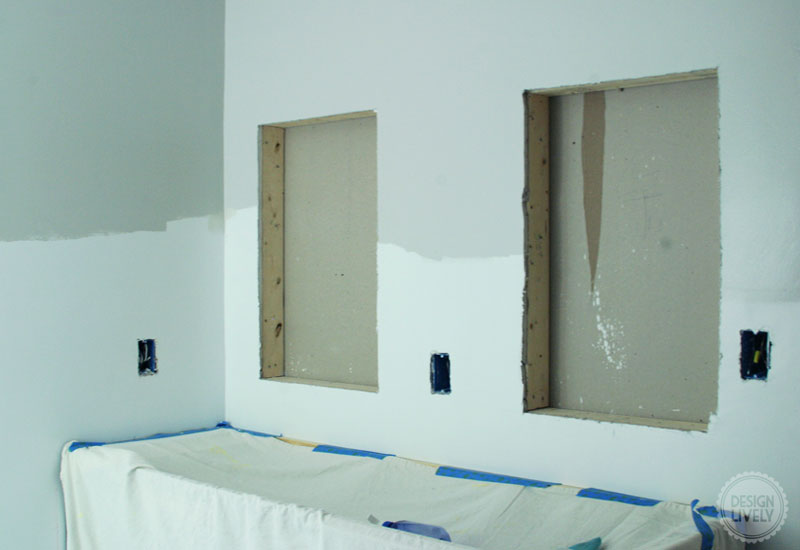 After that, I painted the bathroom ceiling with two coats, and then our bathroom walls with two coats. Believe it or not, I hadn’t thought a wink about what color to paint it (despite having lots of time) and we ended up choosing one at random. It seems hard to go wrong with a light gray when we’ve got so much marble, so we picked Valspar’s Tempered Gray. Since we plan on installing board and batten, I only painted the top 1/3 of the wall. 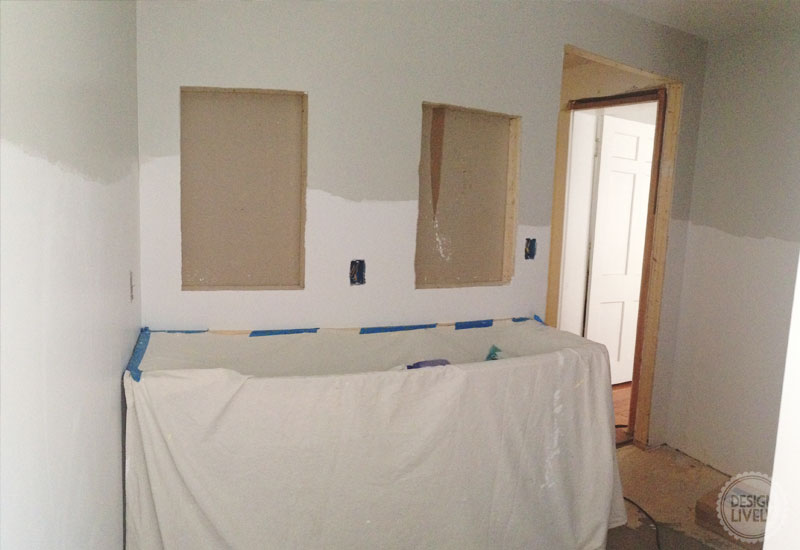 While that was going on, the tiling began! Tile for us was a big fat mess… we purchased our tile from The Tile Shop, about three months earlier. We kept waiting, and waiting, and waiting for our tile to come in. It came in quite piecemeal, and delayed the whole room by quite a bit. We ended up having to give up on one of our tiles (we had originally chosen a 1″ hex for the ceiling and recessed boxes) to get a move-on with the rest of the room. Instead we picked the tumbled version of our 2″ floor hex as the accent. 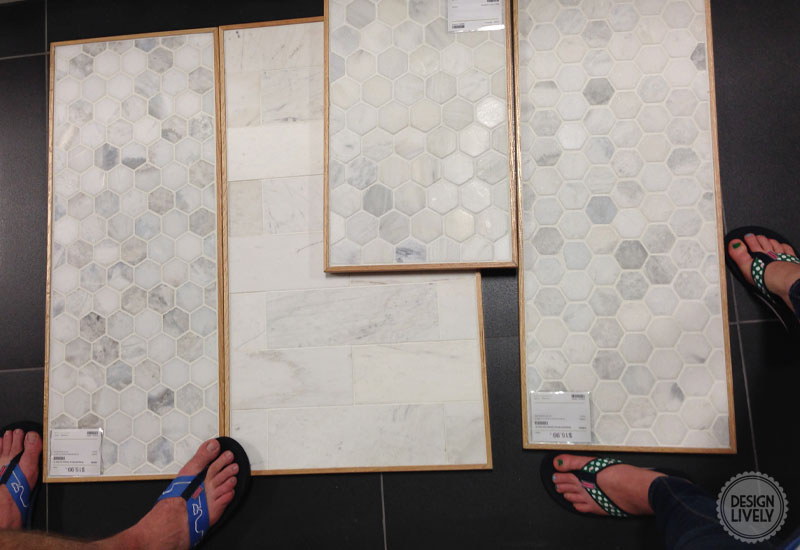 Another lesson we learned, your tile might not match the sample you looked at in the showroom. Once our floor tile finally came in, it didn’t look anything like the sample we picked from – much creamier, less varied, and slightly different crystallization. I knew the lot would be different – but I didn’t expect it to look this different! We brought it home and laid it out on the floor, and fortunately I still loved it! While it looked very creamy next to the original sample in the showroom, once it was on the floor next to the vanity it looked great! 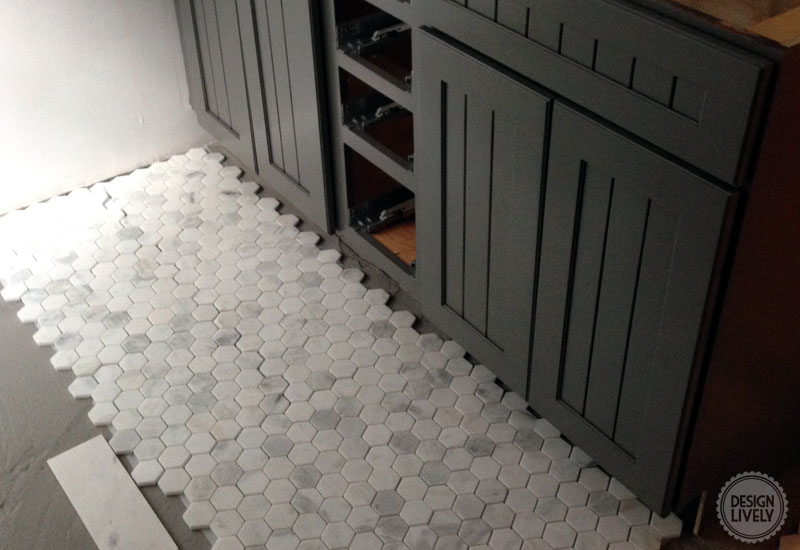 All in all, we ended up not DIYing the tile. It was the best decision (remember, 8 weeks with no shower!) but I am still a little bummed we didn’t get to try doing it ourselves. At the end of the day, we knew that if we DIYed the tile, it would take us a few more weeks, versus hiring someone who could do it in one!

The shower does NOT get plastered, instead the boards were coated with a special red sealer for moisture protection. We choose to go with the smallest grout lines possible, and a pencil trim with I think finishes off the tile nicely. 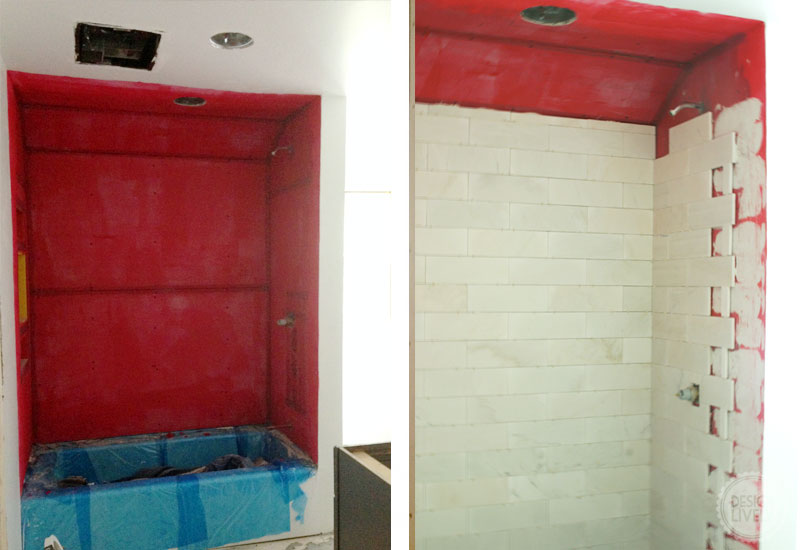 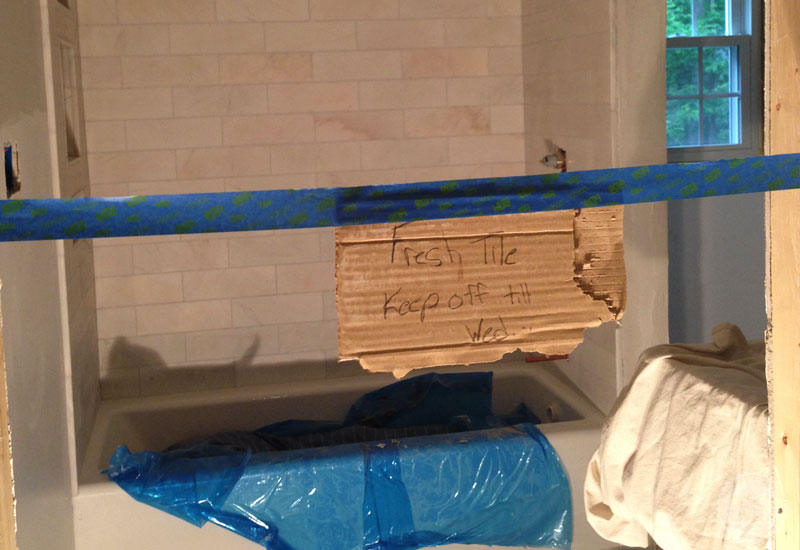 We also needed to pick out our countertop. Since we were doing marble in the shower and on the floor, I thought it was best to stay consistent. Lucky for us, our double vanity was small enough that we were able to purchase a remnant piece (read: less expensive). 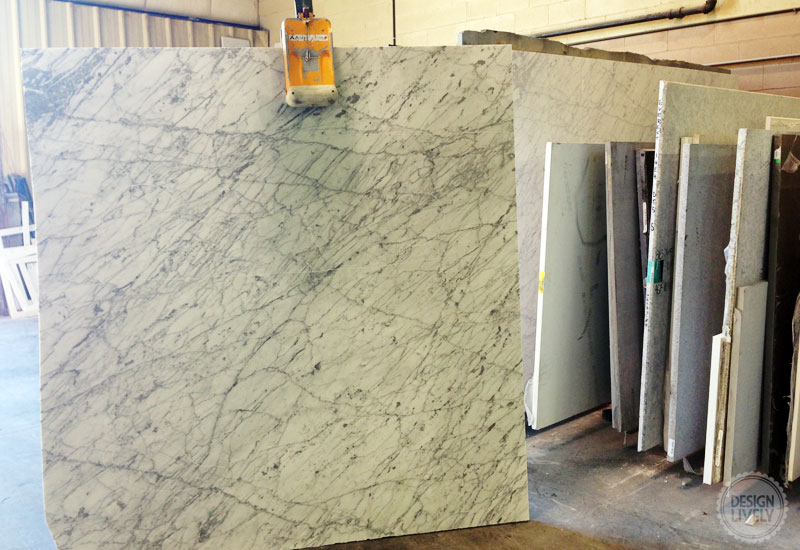 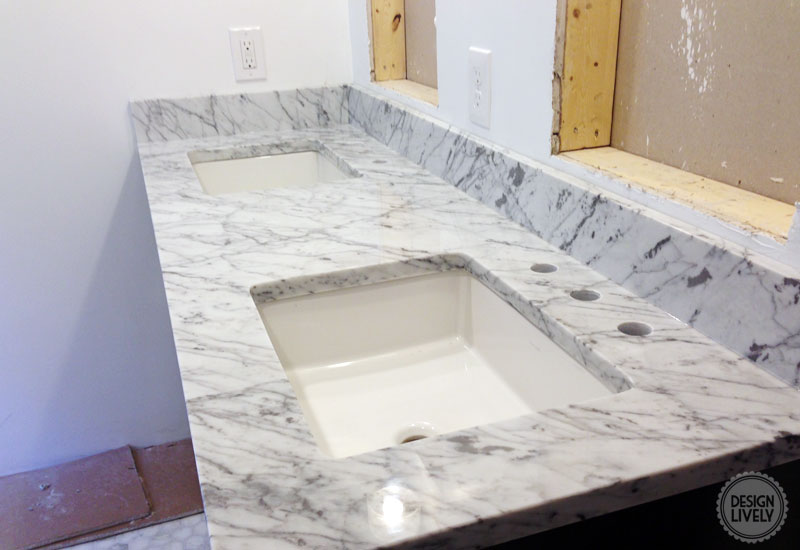 Since marble is such a thick material, we paid extra for the backsplash piece to be shaved down so it didn’t protrude quite as much. 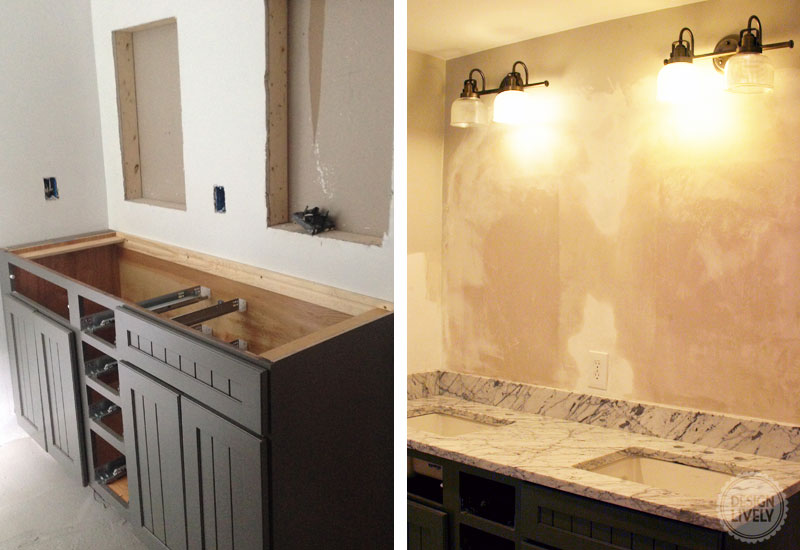 We decided to scrap the recessed medicine cabinets altogether. Since we intended to build them ourselves, we hadn’t purchased anything yet. With all the storage space in the vanity, plus some plans we’ve been formulating to make a new closet in the hallway, there seems to be plenty of storage without them and it was easier to plaster over them than try to move the boxes. You win some you lose some.  ` 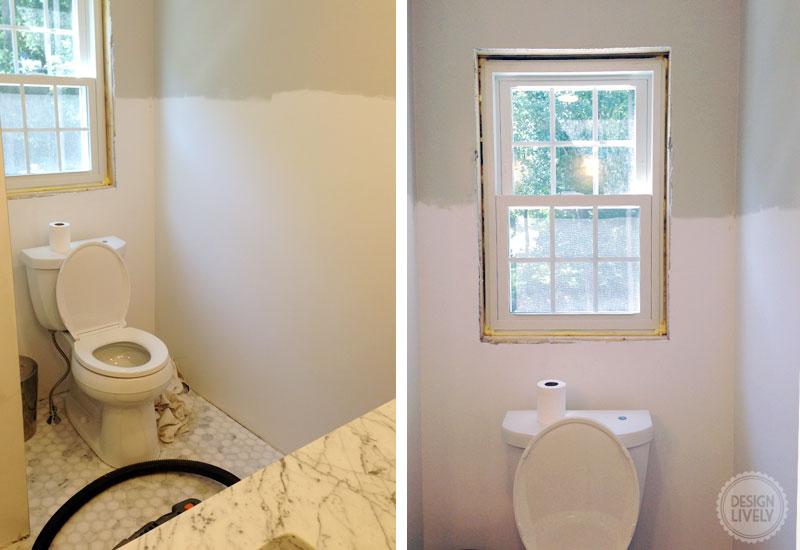 Along the way our new toilet was installed. Notice anything? Like the fact that there is no flusher!?

That’s right, we got the new touchless toilet from Kohler! Haha! 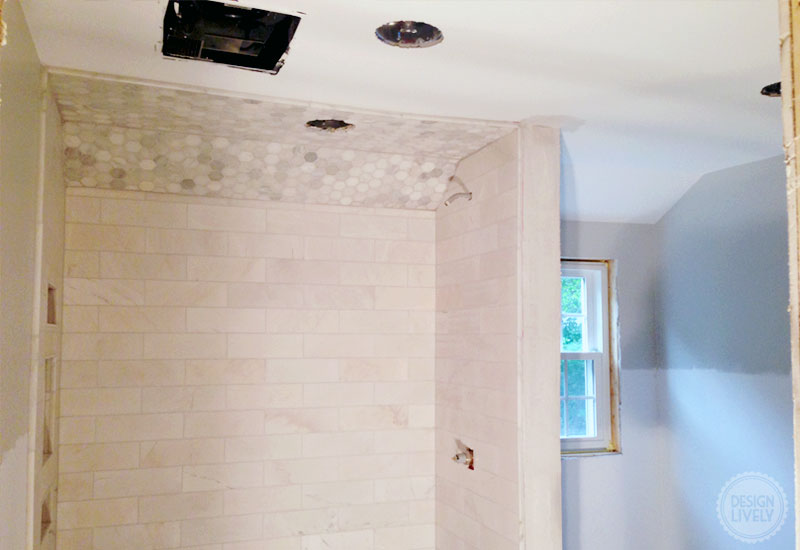 For the lighting in the bathroom, we had a few recessed lights put in the ceiling, and one in the shower, in addition to two light fixtures over the vanity. And we still have the original ceiling vent/heat unit. 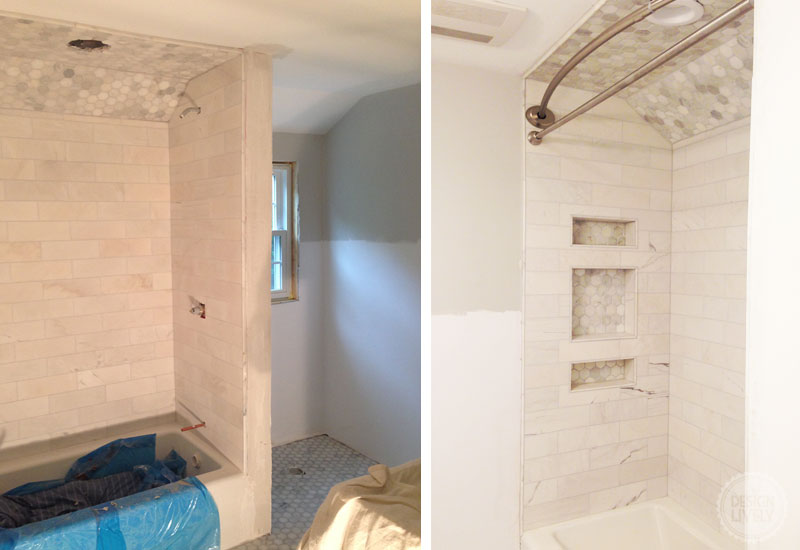 This week Moose put several layers of sealer over the tile in the shower so it’s all set to go! Now we’re trying to decide whether we should go with a tension shower curtain rod, or if we’re willing to commit and drill into the marble. 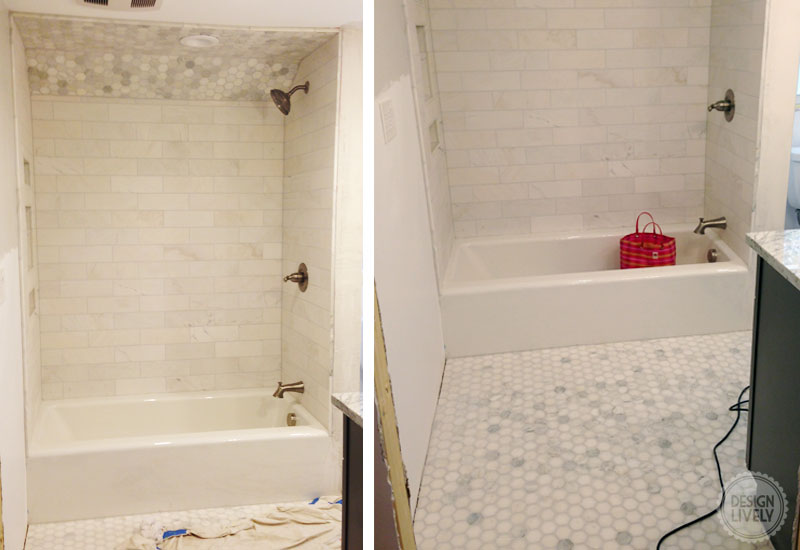 We still need to do all the trimwork, board and batten, fix up the plaster-covered mirror boxes, clean and seal the floor tile, and add hardware to the vanity. But we have a fully functional bathroom!! The faucets just got hooked up this week, and I’m thrilled!

Suffice it to say it’s been a long eight weeks, but it’s been worth every minute!

Phew! Longest post ever. If you got to the end of this post, I congratulate you and bequeath thee one million patience points.